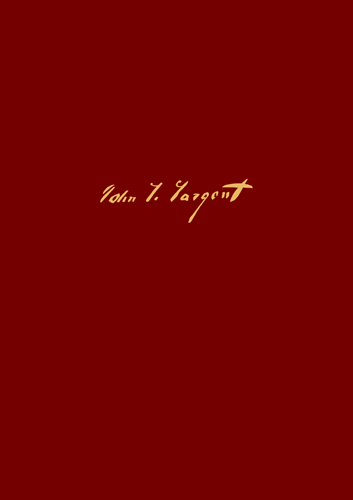 John Sargent: With Reproductions from His Paintings and Drawings
Sir Evan Edward Charteris

This book is the official biography of John Singer Sargent (1856–1925), published two years after his death in 1927, by his friend the Hon. Evan Charteris. John Sargent was the leading portrait painter of his generation, famous for his portrayal of Edwardian era high society. He was born in Florence to American parents and remained throughout his life an expatriate artist, travailing throughout Europe and eventually settling at his London studio at 31, Tite Street. In later life he retired from portraiture to complete public murals in America.

This book documents Sargent's journey, starting as shy, rambunctious child more interested in the outdoors than schooling, and with a natural talent for drawing. His mother Mrs. Sargent, with her insatiable love of travel, was convinced that traveling around Europe was a satisfactory alternative to formal education for the young artist. In Mürren, among the Swiss mountains, he received his first lessons on how to draw a head from Mr. Joseph Farquharson. In Rome, at age thirteen, he studied watercolor under the guidance of the German-American landscape painter Carl Welsch. At age eighteen he began his formal art training at the atelier of Carolus-Duran, then the most popular portrait painter in Paris, and was soon after admitted to the prestigious École des Beaux-Arts. His talent was immediately celebrated by the public, and after a brief scandal involving his now infamous portrait of Madame X, he enjoyed a successful carrier as the leading painter of his era.

Sargent was a member of many art and literary circles of his time and was especially fond of great writers. The book discusses his friendship with literary stars such as Robert Louis Stevenson, Henry James, Edmund Gosse, and includes an essay on Sargent as a youth by Vernon Lee, his childhood friend that remained close all his life. The book also discusses his friendship to fellow painters, and includes his letters to and from his friend and mentor, Claude Monet. Also addressed is Sargent's opinion of growing new movements in modern art, including a letter in which he discusses Paul Cézanne. Although Sargent expressed distaste for these new rebels, they undoubtedly influenced his later work. The book includes 50 illustrations as well as a catalogue raisonné.