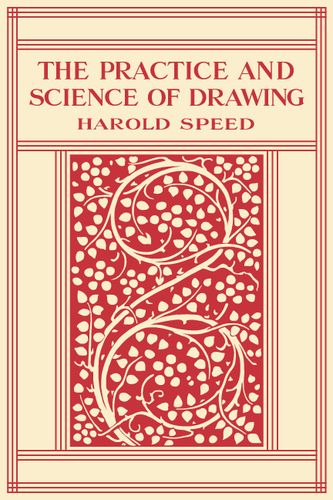 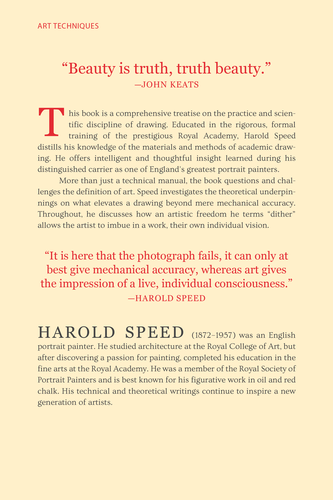 The Practice and Science of Drawing
Harold Speed
$16  USD

Also availiable internationally at:
Wallmart Amazon.com Amazon.co.uk Amazon.de Amazon.fr Amazon.it Amazon.es Amazon.ca Amazon.co.jp Amazon.in Amazon.com.mx Amazon.com.au Amazon.com.br Ebay Kindle Google
This book is a comprehensive treatise on the practice and scientific discipline of drawing. Educated in the rigorous, formal training of the prestigious Royal Academy, Harold Speed distills his knowledge of the materials and methods of academic drawing. He offers intelligent and thoughtful insight learned during his distinguished carrier as one of England's greatest portrait painters. More than just a technical manual, the book questions and challenges the definition of art. Speed investigates the theoretical underpinnings on what elevates a drawing beyond mere mechanical accuracy. Throughout, he discusses how an artistic freedom he terms "dither" allows the artist to imbue in a work, their own individual vision.
ID - kqcj
Format - paperback
Pages - 365
Language - English
Dimensions - 6x9 in
Publication Date - 2019
Originally Published - 1913
ISBN-10 - 1075589665
ISBN-13 - 9781075589669
Kindle AISN - B07WYNR4W4

Harold Speed (1872-1957) was an English portrait painter. He studied architecture at the Royal College of Art, but after discovering a passion for painting, completed his education in the fine arts at the Royal Academy. He was a member of the Royal Society of Portrait Painters and is best known for his figurative work in oil and red chalk. His technical and theoretical writings continue to inspire a new generation of artists.

Image credits have been maintained to preserve the work's original context, however some images have been replaced by higher resolution sources—all images in the book are now in the public domain.

Plate X - The first edition attributes this plate to Lui Liang, however this attribution is now contested. Some believe it may be the work of Zhang Fu.

Plate XII - The first edition lists this plate as attributed to Michael Angelo. It is now believed that this is a copy after Michael Angelo. This plate is also rotated 90° clockwise from the presently accepted orientation of the work. This may have been done intentionally, Speed mentions later in the book that Plate XXXII B is intentionally rotated 90° to better illustrate the image's rhythm.

The Appendix discusses the appearance of the phi ratio in the book's illustrations and conjectures that artists have used this proportion because it has a particularity pleasing appearance. Because this ratio appears in nature, many artists considered it to be of divine beauty and to represent some ideal law of proportion. Science now tells us that this proportion occurs in nature solely due to a Darwinian "natural selection" origin—the previewed beauty of this proportion over others is entirely subjective. For further information on the subject I recommend Professor Keith Devlin's lecture The Golden Ratio & Fibonacci Numbers: Fact versus Fiction.